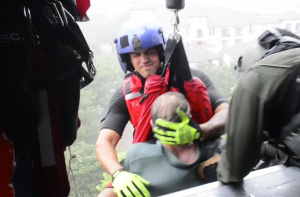 Examples of technologists and scientists applying technologies in response to flooding

These are the people who locate and rescue people, animals, or even valuable objects, e.g.

These are the people who treat flood victims, including people and animals, e.g.

EMTs and paramedics, who provide emergency medical services to those who have been impacted by flooding (including those whose medical conditions have deteriorated due to lack of power)
nurses working in nursing homes and hospitals, who often must simultaneously deal with many patients with different conditions who have been impacted by the flood
emergency room physicians, who develop triage protocols for treating the most serious cases, and who treat people who suffer life-threatening problems caused by floods
veterinarians who treat domestic, farm, and zoo animals that have been impacted

Scientists are involved in studying and predicting floods, or the problems caused by floods, e.g.

app and software developers who provide locations of emergency shelters (for people and animals)
developers and operators of robust communications systems that work even when cell phones are out;
engineers who develop sensors that tell you how fast the water is rising or what contaminants are in it;
engineers who are responsible for water containment and release (barriers, dams)
drone developers and operators

Communications coordinators fill an increasingly important role in figuring out how to triage and deploy multiple “responders” during an event where conditions change rapidly, e.g.

911 dispatchers are the primary link for flood victims. The dispatcher must determine which responders are available, their location, and which events need urgent attention, using maps, forecasts, etc.
National Guard, military, and Red Cross coordinators: Along with local response systems, specialty responders are frequently brought into an area during a flood emergency. They must coordinate within their organization and also between organizations.

Systems specialists design and oversee entire plans of operation during an emergency and work with key players ahead of an emergency: identifying and designing robust communications systems, evacuation routes and evacuation criteria, e.g.