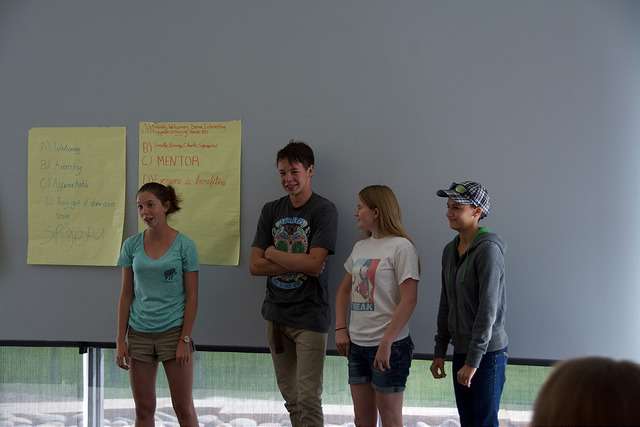 Taos, New Mexico, hosts one of the five sites in the Cafe Scientifique New Mexico node of the Teen Science Cafe Network. As soon as it was formed some years ago, the site’s Teen Leadership Team chose on its own initiative to organize itself in a highly structured manner. That organization has served them well ever since.

A highly structured Teen Leadership Team may be unusual within TSCN. The purpose of this post is to describe how the Taos team is organized, with the thought that other teams around the Network might want to consider adopting a similar structure.

Secretary:
Takes the minutes at meetings and sends them to the Teen Leadership Team
Records attendance for meetings and event on an Excel spreadsheet
Sends event-related announcements and continually updates email database
Writes and sends public service announcements to local newspapers and radio stations
May be responsible to correspond with TL team on my behalf

Alternate Officer:
Responsible to know everyone’s role and able to step in if a council member is unable to finish the season

Currently we have three committees: food, media, and greeting, each one having a head chairperson. The food committee’s responsibilities are probably obvious: create a menu based on determination of previous successes/failures with consideration of budgeting and efficiency of serving food. The greeting committee is responsible for continually tweaking all things involving the coming and going of teens during cafes. Examples of considerations for this group include how to make the sign-in process more efficient, how to ensure students fill out comment cards, etc. The media committee’s responsibilities include documenting cafes using photos and videos and uploading to social media.

At our organizational meetings, the committees take turns talking about their duties and making decisions openly in the larger group. Initially it worked fairly well, except it lacked some focus because the committees didn’t have time to work on their own and it took up more meeting time than necessary. As a result, the food committee sometimes didn’t come up with the full menu and were collaborating and sending their final decisions via email just days prior to the café. The overall efficiency and benefits of the committee process were muddled. Toward the end of that year I had them break off and do their work separately for about 15 minutes after the entire group met and went through the agenda. After the group reconvened for the last ten or so minutes each committee reported back to the larger group on their progress and for approval. For example, the head of the food committee would go over the suggested menu for everyone’s final consideration.

The formation of the council/committee structure and the evolution of what has become a smooth operation to me represents a demonstration of what teens are capable of if they are given the freedom and encouragement to be proactive and step up to responsibilities on their own initiative. In a subsequent post I will relate what has worked well for me in terms of a philosophy of adult leadership that encourages proactivity on the part of the teens and encourages the development of real leadership skills.