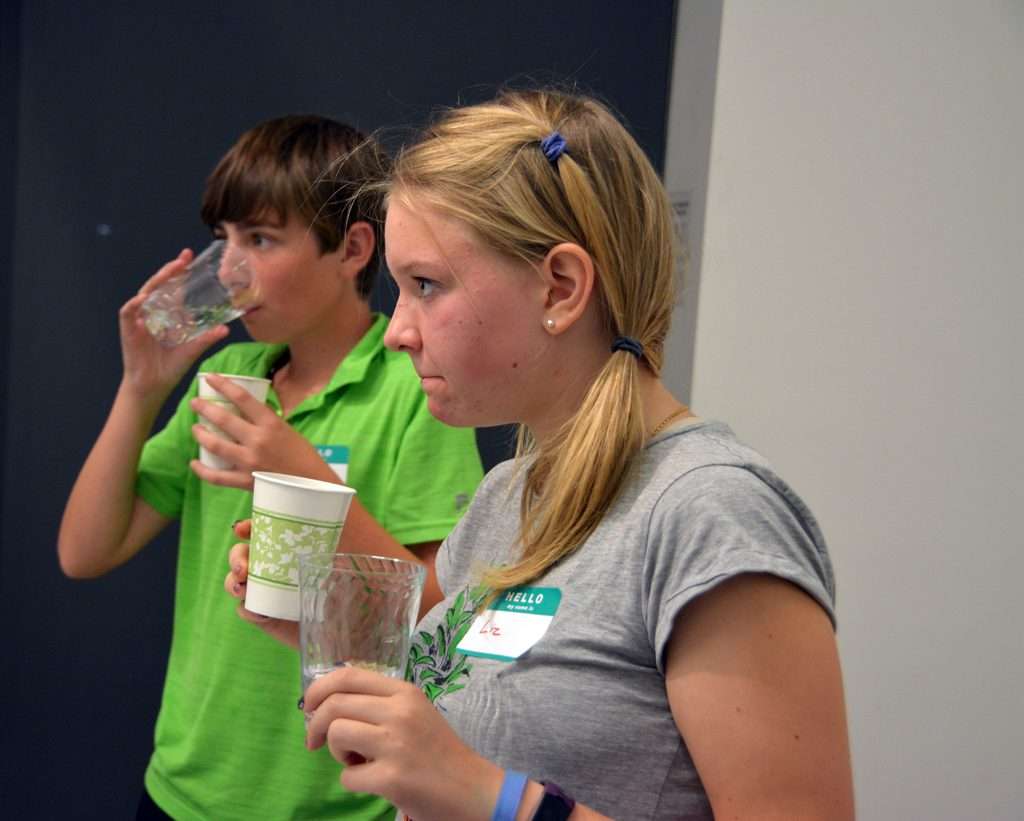 When a group of high school students got together on a recent Tuesday evening, they ate chocolate, taste-tested different bottled waters, competed to build the tallest structure from pieces of newspaper and had a lively discussion.

It might have been any teen gathering, but this evening was a Teen Science Café — one of eight such groups in New Mexico and one of more than 100 nationwide.

The 1½-hour gathering in Los Alamos was held at the University of New Mexico and drew students from different high schools in the city.

“We wanted to make sure we were reaching all teens and not just ones who were self-identified as being interested in science,” said Michelle Hall, who founded Teen Science Café, starting with a grant in 2007 from the National Science Foundation.

“There are lots of kids who don’t fit into school,” she said. “They daydream through their classes.” But “we see them get really excited” when they talk to scientists in a café setting. Hall, a geophysicist, is president of Science Education Solutions, a company that develops science education programs.

Each café meeting starts with a short presentation by a scientist or expert in a related field, followed by food, drink, conversation and a hands-on activity.

A core group of teens, working with a mentor, plans and runs the cafés.

At the Sept. 12 café in Los Alamos, physical therapist Mike Hoog did a short presentation about mindful eating. Teens heard about market research in the food industry and how companies use the information to package and present their products so people buy and eat more.

Kids were offered a jar of single-color M&Ms and a jar of multicolored M&Ms. They learned that people eat more M&Ms when the candies are multicolored, according to research.

They also did a taste test of bottled water in different containers. Then they learned the water was the same, but their perception of the taste had been influenced by the container.

“The teens were shocked” by the market research, Hall said.

They also did a calculation on how far they’d have to walk or run to burn up 600 calories from a large Starbucks drink, she said.

Hoog talked about why he was passionate about mindful eating. He gave each student a piece of chocolate but told them not to swallow it until it melted.

“We eat mechanically,” said Hall. But if people eat slowly, we know they will eat less, she said.

It takes 20 minutes to know you’re full, she said.

The goal of the cafés is for young people to understand science, see it in a new light and see it everywhere in their lives, Hall said.

The Teen Science Café Network provides resources for those wanting to start a program in their area.

In recent Teen Science Cafés across the country kids have learned about the technology used by first responders in emergencies (Washington County, Maine), the use of drones and how to build them (Akron, Ohio), and how to identify manatees through photography, according to the network website.

The Maine cafés exploring emergency response were sponsored by the Maine Mathematics and Science Alliance. The cafés kicked off with a simulated zombie invasion. Kids visited various stations in a school gym where they could determine possible escape routes from the zombies using a GIS-based game, figure out the resources stranded victims might need and learn basic first aid. In a subsequent café, a GIS expert at the University of Maine at Machias showed a new mapping tool she had invented to indicate where floods might occur in their area of coastal Maine.

Science cafés also tell students the kinds of jobs in science they might consider for the future.

The cafés are organized by libraries, museums, 4-H clubs, colleges, STEM education organizations, after-school clubs, committed individuals and a host of other groups, according to the Teen Science Café Network.

The national network offers many resources for those wishing to start a café that is based on the following six design principles:

Programs are highly engaging and interactive.
Scientists are carefully vetted and provided guidance in communicating with teens.
Teens gain a sense of ownership of their program through opportunities for leadership.
Each café site has one or more adult leaders who are committed to the program.
Café programs seek to attract teens with diverse motivations and life experiences.
Café programs actively cultivate strong community relationships.